While having dinner at 7 West tonight we could hear some sort of hubbub in the street, some guy who’d gotten out of a car and was yelling at some kids. I don’t know what it was about, and I couldn’t hear exactly what was said, but the guy was pretty pissed…pissed enough to stand in the middle of Charles Street and scream at these guys. When he saw there were 3 or 4 of them he got back in the car, but as he did he turned and yelled (in reponse to the last thing they’d said to him, whatever it was) “Suck my dick, faggot!!”.

I’m curious…did he intend that to be insulting twice? Or merely redundant? Never mind that calling someone “faggot” these days isn’t quite the insult it might have once been…especially at the corner of Yonge & Charles.

Anyway, I just thought it was a pretty weak way to make an exit after such a dramatic middle scene.

We just watched Open Water. Freaky. Even if I’d wanted to go scuba diving before – and I didn’t, really – there’s no way I’d go now.

And it ended very abruptly. That’s the first time I’ve ever been in the theatre when the credits have completely ended and they’ve started up the muzak again.

“Our strategy should be not only to confront empire, but to lay siege to it. To deprive it of oxygen. To shame it. To mock it. With our art, our music, our literature, our stubbornness, our joy, our brilliance, our sheer relentlessness – and our ability to tell our own stories. Stories that are different from the ones we’re being brainwashed to believe. The corporate revolution will collapse if we refuse to buy what they are selling – their ideas, their version of history, their wars, their weapons, their notion of inevitability. Remember this: We be many and they be few. They need us more than we need them. Another world is not only possible, she is on her way. On a quiet day, I can hear her breathing.”

As I mentioned in earlier posts we were in Nova Scotia from the 19th-28th, driving to the four corners of the province and visiting most everyone we know there. These are notes that I took in the few breaks we found between driving and eating.

And that was it. In the 24 hours that we’ve been home we’ve been busy catching up, and cats won’t leave us alone for fear that we might desert them again. And it felt damn good to sleep in our own bed again.

View it here. I’m ashamed to say I’ve only read two of these, but have a third sitting on my shelf. The Globe and Mail discusses here.

If Springsteen had been dead in 1984 we’d have protested Reagan using “Born in the USA” too.

While on vacation I read two books (well, read one and finished the other): Moneyball by Michael Lewis (buy it) and Dan Brown’s The Da Vinci Code (buy it). Moneyball is about baseball on the surface, but deeper down it applies to my – and pretty much everyone else’s – workplace. It’s about how Billy Beane managed to make the Oakland A’s a top team when they have a third the budget of other clubs, and about the baseball fraternity’s refusal to acknowledge the validity of his methods.

The Da Vinci Code was a good summer book. I flew through it, and it kept me interested without sending me off on tangents of thought. The downside of more complicated books (like The Guns Of August (buy it), which I’m reading now) is that an idea or insight gets my brain going and I spend half an hour daydreaming instead of reading. Da Vinci is silly enough to keep that from happening, but still entertaining enough to kill a long summer day. 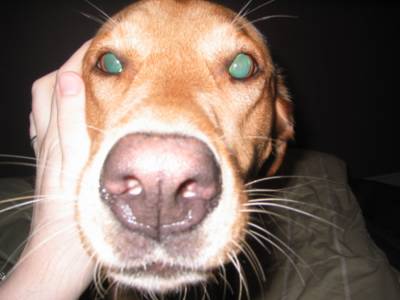 Just got back from 10 days in Nova Scotia. Will post details later. For now, enjoy the demon dog.

The Shortlist Prize long list is out. Sorry if this is old news; I’ve been disconnected for a while.