Another pretty good weekend: the Murphy girls were once again in town. But first I got to see the Raptors game Friday night which, despite the loss to Cleveland, was a pretty momentous game marking the anniversary of Nelson Mandela’s death. Magic Johnson, Charles Barkley, Dikembe Mutombo, and Tracy McGrady were all there.

On Saturday I ran some errands and hit the last couple of days of the Union Station Holiday Market. That night, after the Murphy girls got home we drank some Blue Mountain sparkling and a bottle of Gueuze Tilquin, hit Beerbistro and Triple A and then came home to knock off a few special bottles. This morning we loaded up on breakfast at the Jason George before the ladies left; since then it’s just been a Game Of Thrones marathon. Not a bad weekend. 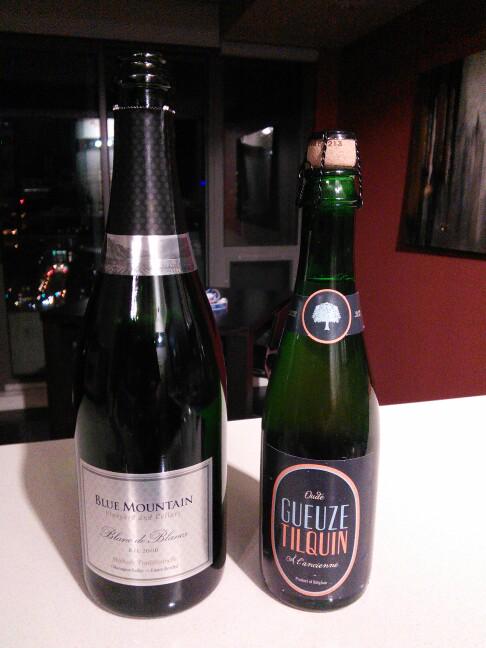 Oooh, that was nice. Every weekend should be a 4-day long weekend. I know, I know, then they wouldn’t seem as special, but think of the bar sales!

Wednesday night we picked up two bottles of Rosewood Estates wine (the 2008 Semillon and 2008 Süssreserve Riesling) and some Cumbrae’s steaks by way of provisions, before kicking off our long weekend at Beerbistro (too crowded inside, too cold outside) and Duggan’s (just right). Not a long night, though…we were pacing ourselves.

By Friday the weather was really picking up…good timing, as we’d decided to take the day off work. We began the day watching the orange jerseys parade along King Street toward Betty’s for the Netherlands-Brazil match before finding a less crowded seat at the Jason George from which to watch. Holland won and King Street went mad; we did a little furniture & art shopping, raided St. Lawrence Market, cleaned up our place (finally!), went for a run, made some ploughman’s lunch and drank a bottle of Firesteed Pinot Noir from Oregon.

Saturday started much like Friday: back to the Jason George to watch the Germany-Argentina match before hitting the farmer’s market and taking a stroll to the Distillery District. I needed a walk, Nellie needed wine glasses, and we both wanted to check out some art. Naturally we ended up sitting in the Mill Street brew pub, watching the excellent second half of the Spain-Paraguay match. When we arrived home Nellie completed her preparations for barbecued ribs, which were a tad on the spicy side…by which I mean they tasted like Satan had pissed hellfire in the sauce. Tasty, but they hurt my ever-so-delicate mouth.

Sunday was, sadly, the beginning of our return to reality. While we had fun taking pictures of all the hubbub of the Queen’s visit to our neighbourhood cathedral and relaxing on our balcony for the morning, it was back to work for me in the afternoon.

I learned something this weekend: that there are three indispensable ingredients of a great weekend. These are, in no particular order: beautiful weather, ample time and people with which to share it.

On Friday I did have to go to the office, but it was nice enough outside that I could walk there, and I didn’t stay long. By noon I was home, fed and ready to enjoy the unseasonably warm day. Nellie and I strolled down to the Bier Markt patio for sunshine and beer (me: Erdinger weiss, Weihenstephan weiss, Spaten lager and Delirium Tremens; she: KLB Raspberry Wheat, Big Rock Grasshopper, Okanagan Spring pale and Koningshoeven Tripel) on a lazy Friday afternoon. Nellie had an urge for an Urthel Hop-It so we wandered up to the Beerbistro in search of one; alas, they had none. So we availed ourselves of the rest of their collection (me: Maudite and Trois Pistoles; she: Durham Hop Addict and Koningshoeven Quadrupel) while making dinner reservations at nearby Harlem. We’d been there once last year and liked it and it felt like the right fit on a lazy Good Friday. One ill-advised cocktail later and were into the starter (catfish Lafayette…yum!) and then our mains. My pork hocks were okay, but Nellie wisely got the fried chicken. I didn’t mind that I missed on some of the flavour. The relaxation was tasting delicious enough.

Saturday was the first day in about two months that I haven’t had to go to work, so I celebrated by sleeping in. Despite it being another beautiful day we didn’t really get out and about that much as we were prepping for dinner with T-Bone and The Sof. Well…Nellie did the prepping, I just cleaned up and provided moral support. Anyway, after a great meal (baguette w/ honey, balsamic and goat cheese; sausage-stuffed pasta with pancetta and sage; steak from Cumbrae’s and three kinds of cheese) this is what our table looked like:

Just for the record, that’s:

And yes, in case you’re wondering, Nellie does like to drink her beer from a wine glass toward the end of the evening.

Sunday was, blessedly, another lazy day. A good lie-in, brunch at the Jason George, a nice long talk with my mom who turned 60 (!) today and Zombieland (imdb | rotten tomatoes), which was excellent. Tomorrow it’s back to work, in spite of my best efforts to take a day off, but for the first time this year I feel like I really got my money’s worth out of a weekend.

Oh, and the other ingredient for a perfect weekend? Consecutive shutouts.

Nice day so far. We slept in until about 10:00 (following yet another delicious, spur-of-the-moment dinner at Fieramosca last night), had a bit of breakfast and watched last night’s episode of Battlestar Galactica (gripping! exciting! sing-songy!) on the couch. The morning’s rain cleared off shortly after that, and off we went.

And whooooooeee, is it ever nice out there. Sunny and warm, but with a nice breeze too. We had lunch on the patio at the Jason George (well; I had lunch; Nellie’d already eaten her leftover pasta) and it almost got a little too warm. Also: when is smoking going to be banned on patios in Toronto? Whenever it is, it can’t come soon enough.

After lunch we walked along Front Street to Staples to pick up a filing cabinet (the one we ordered earlier in the week having been canceled for lack of stock). We checked out the eee PC laptop (tiny! adorable! sufficient!) that I want to get, but didn’t buy one, just getting a small desk/cabinet combo for Nellie. We brought that home and went back out to enjoy the day a bit more. Now Nellie’s happily putting together her new furniture and looking forward to dinner. See, I made the mistake of reading out the new beers on tap at C’est What (courtesy of Bartowel news) and once she heard “Church-Key Cranberry Wheat” her mind was made up.

Apparently my blog post from Thursday night made CBGB hanker for the beerbistro, but when we got there last night at 5:00 it was jammed full. Plan B ended up being the Jason George, just down the street, where we started drinking a variety of beer but were all drinking Blanche de Chambly in the end. They came back to ours for one of the bottles of wine that followed us home from France.

My new musical obsession: the song “Oh My” by Office. Here’s the video.

By the way…girlfriend du jour: Jessica.

Your daily dose of dumbassery*: