It might seem unnecessary for me to say that it was a beer-filled weekend, but it was. More so than usual.

It started a few weeks ago when beer writer Crystal Luxmore held a contest, offering tickets to a Toronto Beer Week event called The Beer Experience for whoever tweeted her the best picture of themselves enjoying a local craft beer. This picture of a Muskoka Detour on the dock at Bat Lake took the prize. As if it was even close. 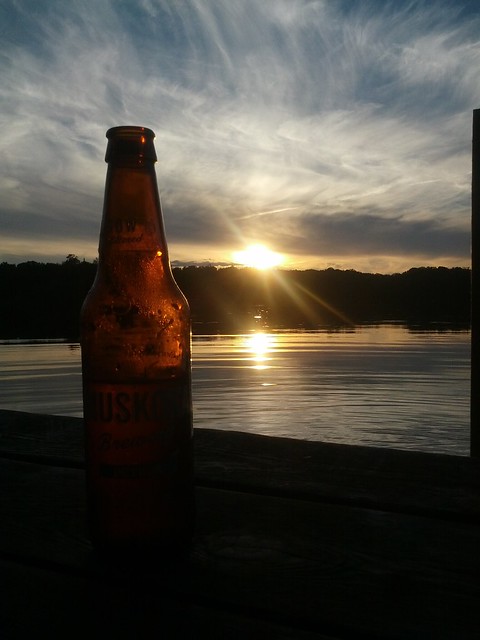 The event itself was last Thursday at the beautiful Berkeley Church. The usual lineup of local craft breweries was there, but each brought something special: a brew not generally available, or even a one-off made specifically for this event. We bought ten tickets each and made the rounds. Here’s what I had; Nellie had ten completely different ones since our tastes don’t overlap much.

All of them were pretty good except the Junction, and that makes two beer festivals in a row where I drank a terrible beer from Junction…I think they’re on my shit list now. The Side Launch, Wellington, and Amsterdam (which wasn’t even a special…not sure why I got that, honestly) were all terrific, but the Oast House dark chocolate cherry was absolutely spectacular. Definitely my favourite of the night. And how about that venue?

On Saturday, following TIFF film #3 we met a friend for a(nother) mini pub crawl with her, starting at Bar Hop (Sawdust City Golden Beach Pale, Left Field Prospect: Kohatu, and Block Three After Market Mild), then trying to get in at Wvrst but being turned away by the very long (and very fucked) lines before retiring to Beerbistro (samples of Rodenbach Grand Cru, Publican House Square Nail Pale Ale, and Unibroue Maudite, and a glass of Unibroue Fin du Monde) before heading to C’est What for some food. Or so we thought.

We arrived to find C’est What in the throes of its own Beer Week event, with 5 stations set up around the bar pouring dozens of samples, many of which I’d never tried. I’d love to be able to tell you what I drank but somebody threw out the paper we’d used to keep track. However, based on the list I found on twitter and my rather fuzzy memory I think these were the samples I picked:

One thought on “Toronto Beer Week”