I first saw Mogwai 15 years ago. It was the loudest…uh…just, the loudest. Also one of the best shows I’ve ever seen, but a venue like Lee’s Palace just isn’t built to withstand such monstrous sound. I saw them again eight years ago, this time at The Phoenix, which was a much more suitable vessel.

Last Tuesday I saw them for a third time, this time with Lindsay in tow. After some dinner at the Edmund Burke we took up our spots on the floor of the Danforth Music Hall, and waited. (Side note: the opener, Xander Harris, was…not our thing. At all.)

I admit, I’ve not followed band news all that closely in recent years, so I didn’t know that a) John Cummins has left the band, or b) Martin Bulloch had to drop out of this tour due to ill health (presumably due to his ongoing pacemaker issues…either way, get well soon Martin!) to be replaced by Honeyblood drummer Cat Myers.

Luckily their touring members didn’t miss much of a step, so they were as epic as I remember. They drew heavily on the new album, but still dipped as far back as “Cody” and then hammered us with “Mogwai Fear Satan”. That, as when I saw them in 2009, was the penultimate song of their main set. Poor Lindsay, despite my warnings, probably didn’t quite expect the noisy onslaught against which we were to stand in, but gamely held on. Her response was the same as all first-time Mogwai-ers, I expect: beautiful, but brutal.

I wondered what their encore closer might be. I’ve heard “Like Herod” live. I’ve heard “Helicon 1”. I’ve heard “My Father My King.” I’ve heard “Mogwai Fear Satan” twice now. So “We’re No Here” was the perfect choice — and, to my mind, the only more recent song possessing the enormity those other songs can claim. 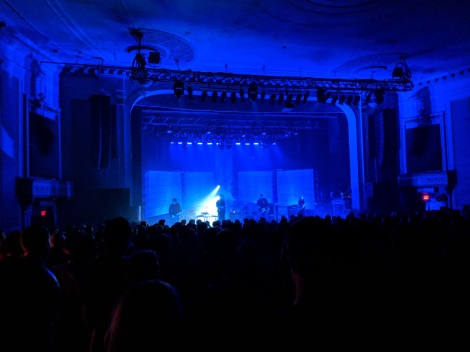