We arrived back in Toronto last night, ending an awfully busy 5-6 weeks of travel. The last ten days have been pretty intense family time, spread across a few locales.

Last weekend my mom was in town, in the middle of a trip to visit her sister in Guelph, so a bunch of family and a few friends drove into town for dinner before they went to see Come From Away. We all met at Locale Mercatto for an early dinner and had a good old chat, not to mention some good food and nice volcanic wine. Apparently we were also meant to go to the play but we got our wires crossed; in any case I had a work issue in progress, and we had packing to do.

The next day we flew to Halifax, had a quick stop in Bedford, then drove to the Annapolis Valley and met Lindsay’s mom and brothers at the same cottage as last year — but for two nights this time. We played games outside and had a big grilled steak dinner the first night, but spent the second day huddled inside around a fire for warmth on what turned out to be a cold, rainy day. It was still completely relaxing though, and the rain broke long enough for some grilled sausages after our games were complete.

Tuesday morning was much nicer so we squeezed in a last game of washer toss before departing. We stopped at Lightfoot & Wolfville on the way back, having just missed their grand opening last year. We bought a few bottles to bring back, and ate (extremely delicious) pizza and garlic fingers outside. Then it was back to Bedford. 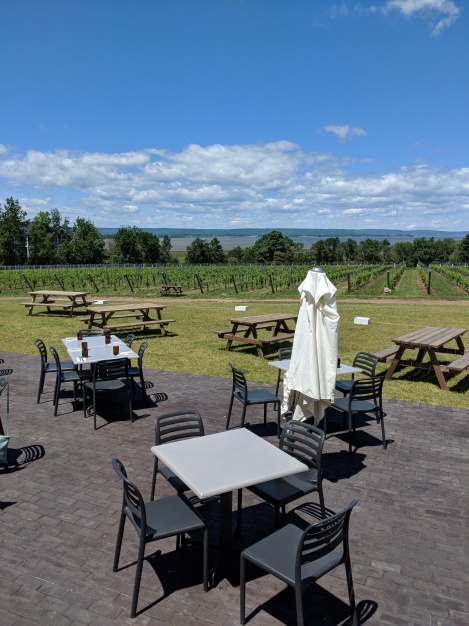 We spent the Tuesday and Wednesday nights at Lindsay’s dad’s place, zipping downtown for a quick dinner Wednesday at Your Father’s Moustache, and on Thursday attending her youngest brother’s graduation. After a big feed of Chinese takeout that night back at their mom’s, we played washer toss ’til it got dark and Yahtzee (seriously) into the wee hours and then crashed.

We took it easy Friday, eventually exiting Bedford and driving to my parents farm. We arrived late that night, just late enough to crash hard in the nice cool basement. The next day we slept in a bit before getting up and getting to work — it was the day of my parents’ 50th anniversary party, and there was an open house from 1-4. A friend of mom’s (the same one who accompanied her to the play the week before) catered, and we were all put to work slicing and setting and placing and cleaning. Nearly a hundred people wandered through the house on a stiflingly hot day, all to congratulate my parents on a pretty remarkable accomplishment.

We did manage to squeeze in a tiny bit of relaxation time at the farm as well, from playing many games of crib, to perpetually scratching the dogs, to lying in a hammock.

Everyone left Sunday morning after things had died down. We got to the airport and had a glass of wine at Vino Volo, which might have been ill-advised since Porter boarded their flight almost instantly, resulting in us actually getting paged as we walked down the terminal. We worked on the flight back, arriving to a moist blanket of heat draped over Toronto, and have scarcely left the loft since.

It was a fun trip, if not terribly relaxing. Frankly, we’re pretty excited to not have plans to fly or drive anywhere the next few weekends.