Earlier this week we got back from 10ish days in Europe, with a couple of fun city visits wrapped around a work thing.

We were off to Copenhagen, and had a pretty good flight except when Lindsay’s chair rocketed backward and knocked wine all over the lady sitting behind her. Eep.

We landed in Copenhagen early Friday morning, had maybe the easiest customs entry ever, took a short (but expensive! no Uber here) cab ride downtown, and lurked around the bar at the Hotel Danmark until we could get into our AirBnB.

We grabbed a quick lunch at the Brewpub Copenhagen, where we became familiar with the ubiquity of smørrebrød (food piled on a single piece of bread). We had smoked salmon, potato & fried Norwegian lobster, and seasoned lamb. Oh, and their beers which were mostly named after musicians like Van Morrison, Cole Porter (get it?), and Jaco Pastorius.

After a quick nap back at the flat, Tess arrived from Gothenburg. We hung out for a bit, looked up decent places to eat, and settled on Aamanns 1921. We chose well, too, as that might have been the best meal of the whole trip: a tasting menu consisting of a beautiful raw salmon amuse bouche, hake (paired with a local Danish Solaris-based wine), an exquisite steak tartare, pork, lamb, and a lemon dessert. It was all of it fantastic.

We decided to go a bit further afield Saturday, catching a train out of town to the Louisiana Museum of Modern Art. It’s in a beautiful green seaside spot, and building is as beautiful as the ground. Their collection was very good, but their special exhibitions were great, especially Liu Xiaodong’s Uummannaq. Only the Pipilotti Rist exhibit disappointed.

After returning to Copenhagen we grabbed snacks and waited for our next meal. This time they indulged me and let me lead us to Øl & Brød, Mikkeller’s food outpost. We each got the tasting menu once again:

The pork shanks were Flintstone-esque in size, so we slowly walked home, groaning.

We scrounged up some breakfast at a nearby place, then went for a (cold, windy) walk around the city. We sat in the quiet park near the royal library (which was closed, sadly) and walked up the river to the colourful Nyhavn. 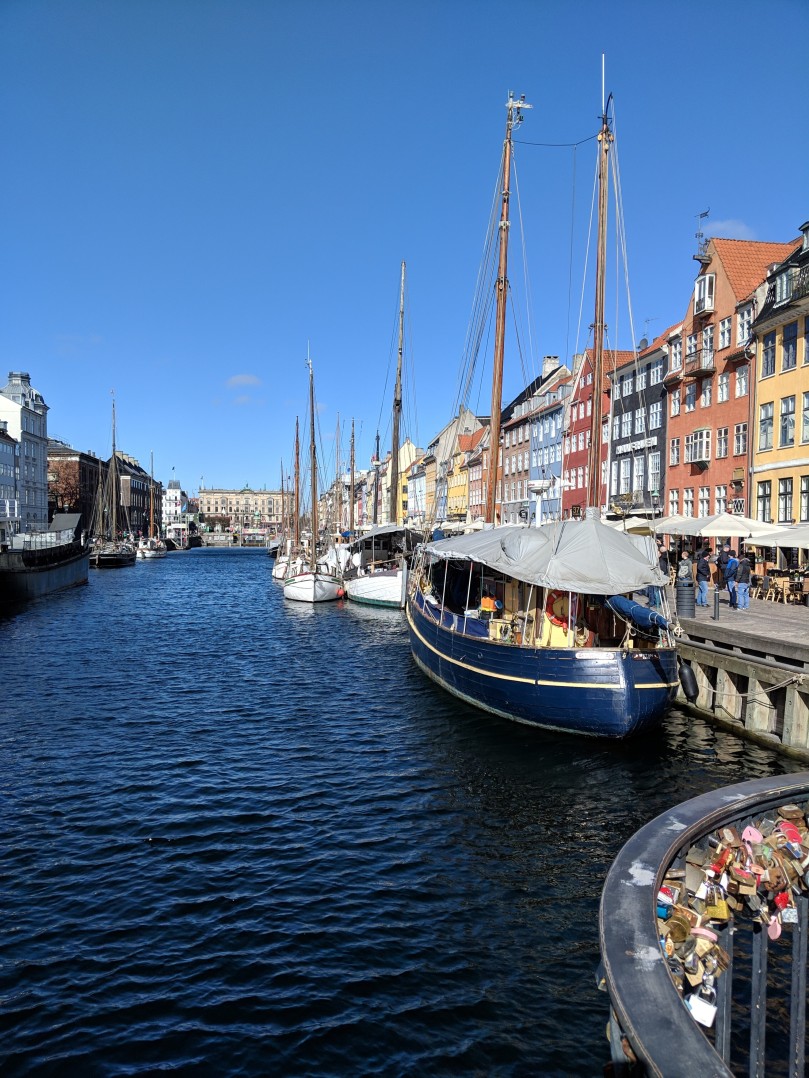 We crossed the river, grabbed coffee at The Corner, and sat by the Strandgade watching people and dogs. Especially dogs.

We had lunch booked at Barr, which ended up being a real find. They take their beer very seriously there, and the decor (and view) were gorgeous. We ran through most of their food menu:

The stars of the show, though, were the beers. Bokkeryeder is a cult figure in the beer world, and Barr is one of the few places that seems to carry his creations. We split a bottle of 2017 “Vlierbloesem” Lambic w/ elderflower, and it was sublime. We finished our meal with a Brekeriet “fruit salad” Berliner weisse.

One hurried walk back to the AirBnB later and Tess left us, bound for home. We spent a lazy afternoon there, recovering from one meal and thinking about the next. We were booked at Bæst, an Italian place in Nørrebro. We started with Negroni and sparkling, then went with the Bæst Experience Menu which came with pickles, the freshest mozzarella I’ve ever eaten, stracciatella with mushrooms, salads, five kinds of charcuterie, and two slices of pizza each. We paired it all with a killer bottle of Sangiovese. After, we ordered some gelato; my hazelnut was tasty, but Lindsay’s fior de latte gelato seemed to achieve the level of religious experience. 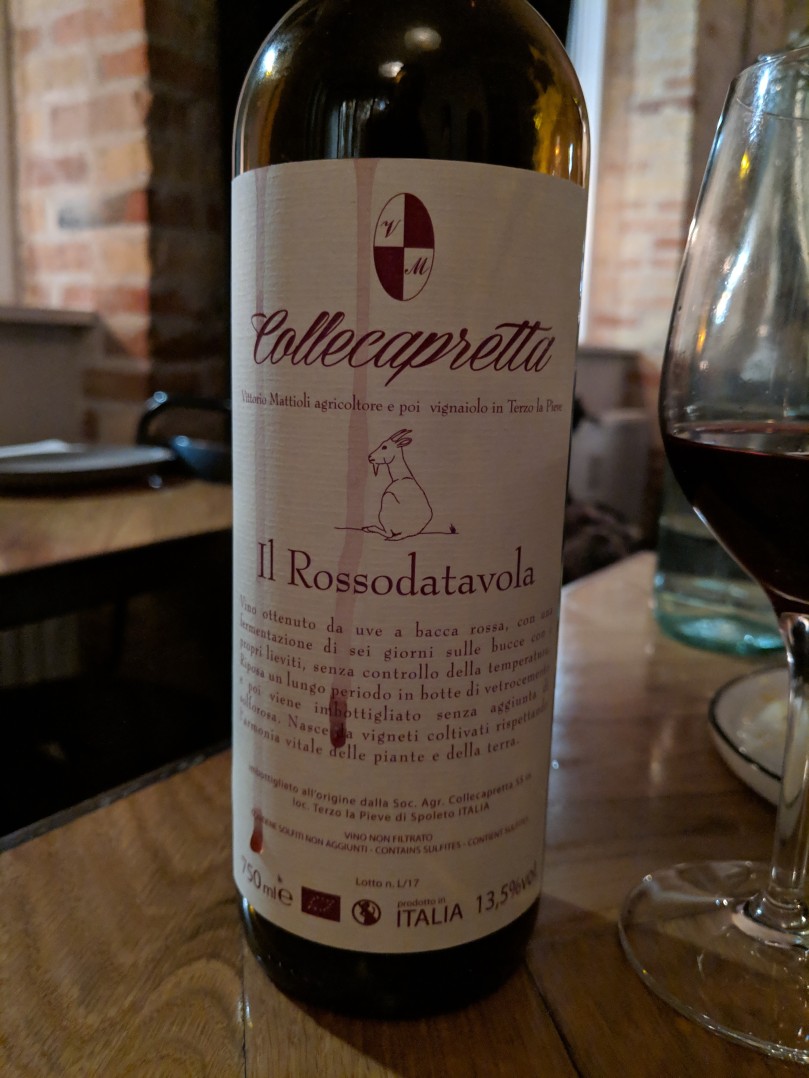 We had to get up early and roll out of the AirBnB, just as the weather was turning nice. A quick ride back to the airport and a bad lunch (we could not find the Mikkeller bar in CPH) later we walked straight onto our flight to Amsterdam.

The flight was short and easy, and we had a cushy ride from the airport to The Hague, where we checked into the Marriott. We hung out there for a bit, grabbing a drink and quick bite in the bar, before eventually heading into the town for dinner at Oogst. The vibe there was a little weird (it was a quiet Monday, I guess?) but the food made up for it.

All in all, a pretty good start to our brief stay in The Hague.

After some breakfast in the room and an early meeting for me, we departed the hotel to see a bit more of The Hague. We walked this time, stopped at a random Italian place for lunch (good food; crap service), down to the Binnehof, and eventually to the Maritshuis where we took in the stunning building and a lovely collection of paintings, including a couple of rooms of Rembrandts. We also had to fend off crowds of people only there to take a selfie with Vermeer‘s Girl with a Pearl Earring. Which is lovely, don’t get me wrong, but for the love of god people, at least look at it before you Instagram it. 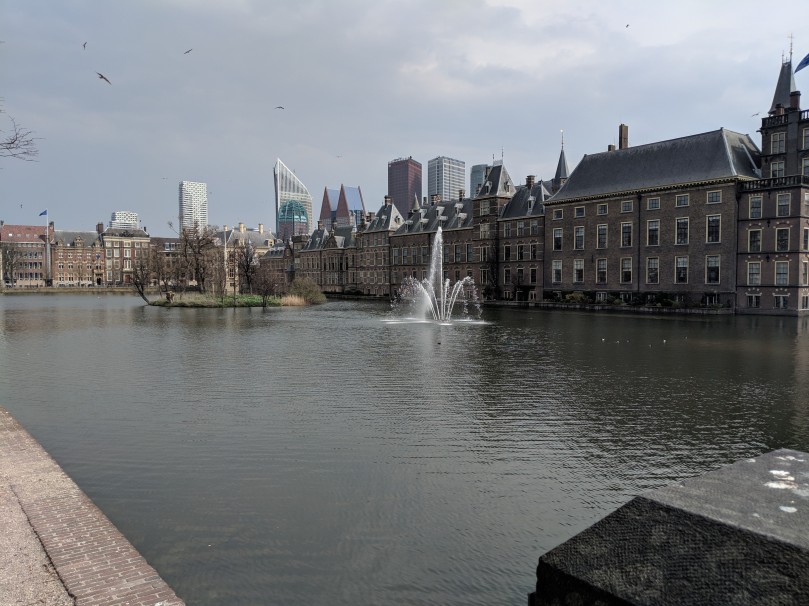 After that we traveled to another museum, this one just behind our hotel: the Gemeentemuseum. They have a huge collection of De Stijl works, some remarkable modern pieces (including a few by Louise Bourgeois like this beautiful spider couple), and had on a photography exhibition by Erwin Olaf which started strong but tailed off a bit. Still, a more-than-worthwhile visit.

That evening I had a work thing in a fancy alien greenhouse. Lindsay ordered room service. She won.

My conference took up most of the day, and my introversion demanded a quite dinner with Lindsay versus a fancy work event, so we made our way to Bouzy. We’d spotted it on our way to Oogst earlier in the week, and liked the look of it. It wasn’t our best meal, but it was what I needed.

I finished my conference shortly after noon, then Linds and I grabbed lunch at Brasserie Berlage behind the hotel before piling into a car for Amsterdam. We had elected to spend our first night in Amsterdam at the Conservatorium Hotel, where we stayed last fall. It remains in an entirely separate class of hotels in our mind, less a hotel than another world where everything is beautiful and just the right level of service — impeccable without being overbearing. We ordered a bottle of Rioja and unwound in the room.

After a while we roused our lazy selves and walked down the street for dinner at Rijks, the Michelin-starred restaurant attached to the Rijksmuseum. The vibe was a little weird, right from the outset. We couldn’t explain it; everything just felt off. It didn’t help that our server would disappear for great tracts of time. Anyway, we tried to rally.

The amuse (apart from the four small pieces of summer sausage sitting on the table) was a slice of pear dusted with pistachio. We had that, and the first course (scallop w/ radish, codium, and seaweed vinaigrette; cabbage points salad) with glasses of Champagne. The food so far was good, not great.

But then, the next two dishes — a millefeuille of beetroot w/ Tomasu 24-month beurre blanc & parsley oil, and a tartelette Rendang made w/ goat, sprouts, and granny smith apple — were both among the best things I’ve eaten all year. We finished with 400g of dry-aged Simmentaler ribeye, aged 4 weeks, and a bottle of Tuscan red.

I think there might have been dessert, but I don’t quite remember so it must not have been remarkable. So: not quite the experience we were hoping for, but I still dream about those two middle dishes.

We had another lie-in, determined to make the most out of our time in the room. Eventually we rolled downstairs to the brasserie in the lobby for their brunch. It’s stupidly expensive, but wow what quality. Superb food, but several awful other customers. Entitled finger-snappers, whiny Russians in luxe tracksuits, demanding table-snatchers…maybe the high price is to pay the staff to put up with it. Anyhoo.

We checked out, left our bags, and made our way to the Rijksmuseum. But then, on the way, we saw the lineup for tickets. Then we started doing some research, and realized that the access to the Rembrandt collection (all on display for the first time, apparently) was sold out for weeks. We decided it wasn’t worth it, and instead visited the Stedelik just down the museumplein, which was very worth it. It was filled with modern art, much of which Lindsay knew, and we spent a grand total of five or six hours (!) there across multiple floors, which a yummy lunch just ’round the corner at Blushing in between.

We grabbed our bags from the hotel and (very painfully) acquired an Uber to drive us a little ways across town to our next hotel: The Hoxton. This one had a beautiful view of the Herengracht.

We didn’t have much time to enjoy it though, as we were off to dinner at Envy. I’ve had my eye on this place since my first visit to Amsterdam 7 years ago, and finally booked it. I’m glad we did too: it beat the pants off the Michelin-starred restaurant the night before in both food and atmosphere, even with the awkward couples on either side of us. We got the six-course tasting menu:

The walk home, in the warm weather we’ve been missing for months, was almost as good as that meal.

Again, we were slow getting out of bed, but you know…vacation. We had some breakfast downstairs at Lotti’s, then set out to see more of the city. After a stop at a coffee shop we started with Dan’s agenda: hitting beer places I’d never been to before. We hit Café Brecht, which started out incredibly well because of the delightfully ramshackle decor, but quickly got insanely busy, so we escaped after a piadina and a brezel and some beers.

Next up was Café de Spuyt where drank some excellent beers, chatted with the bartender, and listened to some excellent music. After some time there we walked on to Beer Loves Food, which is owned by the same people as past-visit-favs Beertemple and Craft & Draft. Again, we hit it just before it got really busy, and managed to have some interesting and challenging beers, plus some crazy petatje rendang (fries covered in spicy beef) to fill our soggy bellies.

We walked home the long way, seeing just enough of the Centraal / De Wallen area for Lindsay to know she wanted to get away from the crowds, and home we went. We’d had quite a day so we just went to the room, did some packing, ordered room service burgers and champagne, and called it a night. We were done in. 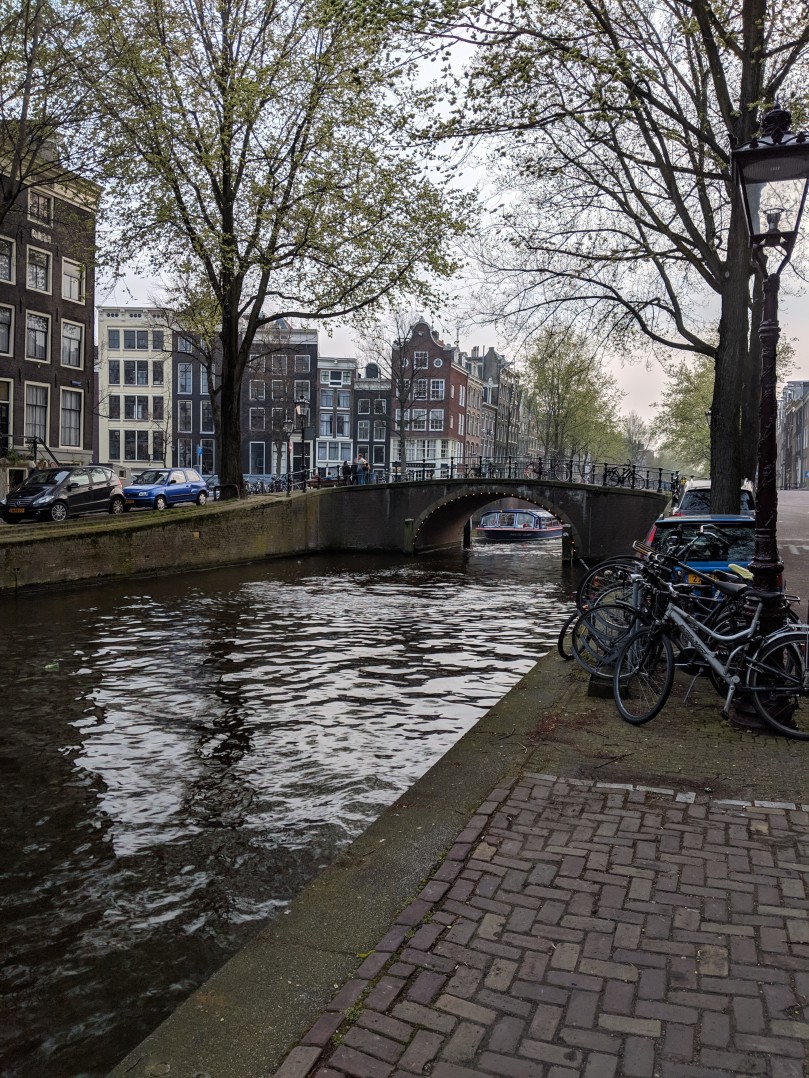 Blah same blah: pack, airport, flight (I watched Widows and then worked for five hours), and then: home. We were gone less than 10 days, but it felt like three weeks.