Last July we said goodbye to Sonny, the older of our two cats. We still miss him every day, but he’d struggled with kidney problems for so long, and went downhill so quickly in those final days, that it almost felt as if it had to happen. Not to over-anthropomorphize, but Sonny seemed at peace when we put him to sleep. He was tired. He’d fought a long time.

We were worried about how Sonny’s death would affect Michael, his younger brother. Michael had always been a little needy, and liked attention, even Sonny’s which tended to be rough. After all, it was Michael who got our attention in the cage at the Humane Society eleven years ago, and his cuteness led us to bring them home, so they’d always been a pair. But Michael thrived on his own after July. He owned Nellie and I now, had us all to himself. We couldn’t even be in a different room than him for long; he’d have to come snuggle with us, or nuzzle us, or eat Nellie’s hair. And I couldn’t watch TV for two minutes without this happening: 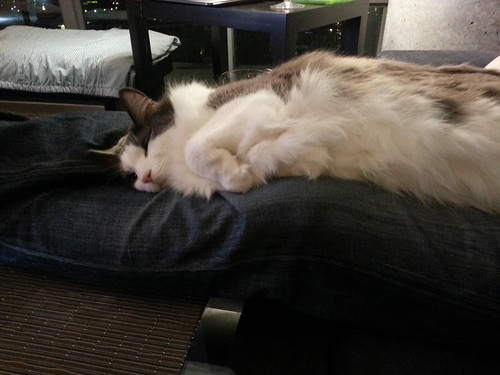 He was just always, always happy. More like a dog, almost, with all that unrestrained affection. Frankly, we probably misnamed him — if Sonny was the kinda-sullen older brother who was prone to violence, Michael was always…well, he was always more of a Fredo than a Michael. No dark schemes or quiet intelligence with this one…he just wanted to please everybody all the time. Plus, like Fredo, he exactly wasn’t the brightest. 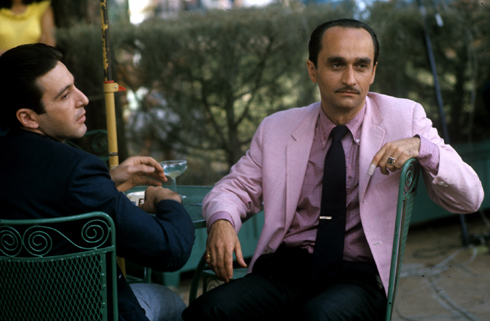 He’d avoided all his brother’s health problems, and passed his check-up in March with flying colours, considering his age. We thought we’d have him with us a while longer. But things took a turn this past weekend.

On Saturday he seemed a bit lethargic, and kept trying to wheeze up a hairball. That’s not unusual, especially with hair as long as his, but he just couldn’t get this one up. Still, he spent part of the day on my lap and part napping under Nellie’s blanket, and even some time playing catch with me while enjoying a sunbeam, so pretty close to normal. We’d seen this before and figured he’d be back to normal after he hacked something up.

Then, yesterday, we noticed that his breathing was a bit shallow. He wasn’t wheezing, and he was still getting about just fine, but he was definitely a little off. Especially that night, as we got ready for bed — he didn’t start the evening on the bed with us, as was his custom. Instead he curled up on a pile of sheets in a corner of the closet. We went to sleep, worried that this hairball was giving him more problems than usual, and planning to call the vet in the morning.

I don’t know what it was that woke me up in the middle of the night. I’d finally drifted off despite worrying about him, but something woke me. I looked for him, and found him on the living room floor, struggling to breathe. We rushed him to an emergency vet clinic where they stabilized him, put him on oxygen, and kept him overnight. He had fluid around his lungs and his heart, which was making it hard for him to breathe. The next morning we heard the results of the tests on that fluid: it tested definitively for a carcinoma. Cancer, and not operable. They broke it to us that we could never bring him home again; even if they drained the fluid from his chest it would just build back up to choke him. He’d need oxygen pumped constantly just to keep breathing.

And so, we went to the vet clinic. We spent a long time with him, as much as we could. We rubbed his belly and scratched his chin inside his oxygen tent. Even with all his discomfort and stress, he couldn’t help himself — he rolled onto his side and started purring as we stroked him. We kept on scratching and rubbing as he gently lowered his head and closed his eyes for the last time.

When Sonny died we’d been expecting it for years, then had a few days to come to terms with the prognosis, and then had a full day at home with him to spoil him. With Michael it was barely 12 hours after realizing how sick he was that he was gone. We wanted so much more time with him to say a better goodbye, but it wouldn’t have been fair. After eleven years of being so intensely affectionate and loving with us, we owed him the gentlest end possible.

And so: goodbye. Goodbye Michael, aka Mike, aka Monkey, aka Dumbass, aka Stinky Mike. Thanks for getting our attention at the Humane Society that day. Thanks for being with us and making us goofily happy all these years. Say hi to Sonny for us when you see him. We miss him, and already we miss you so much we can hardly stand it. We love you both. We’ll always love you both. Rest in peace. 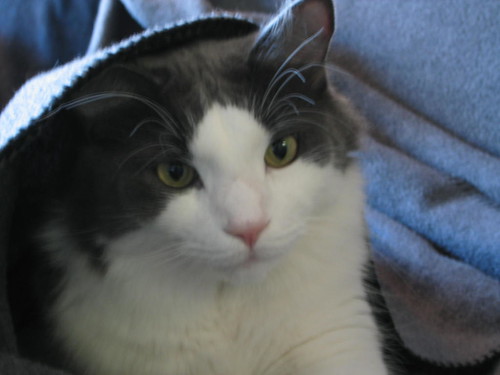 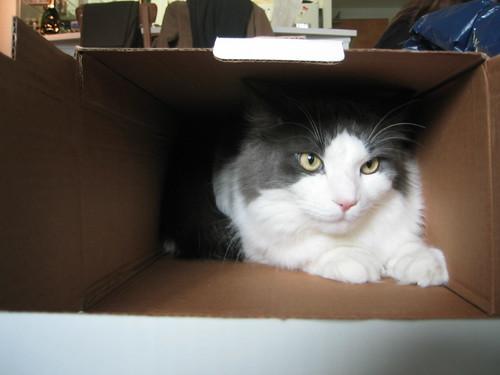 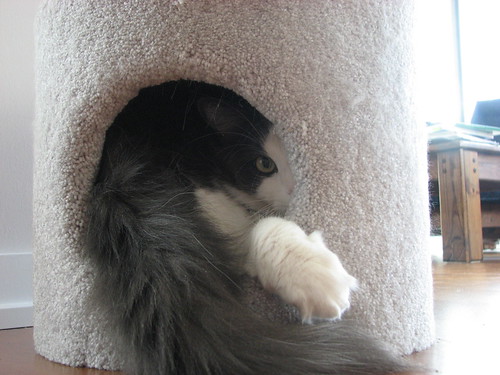 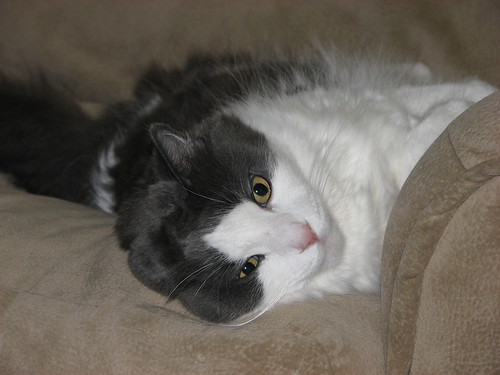 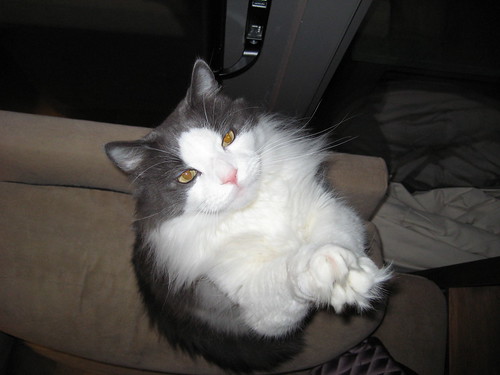 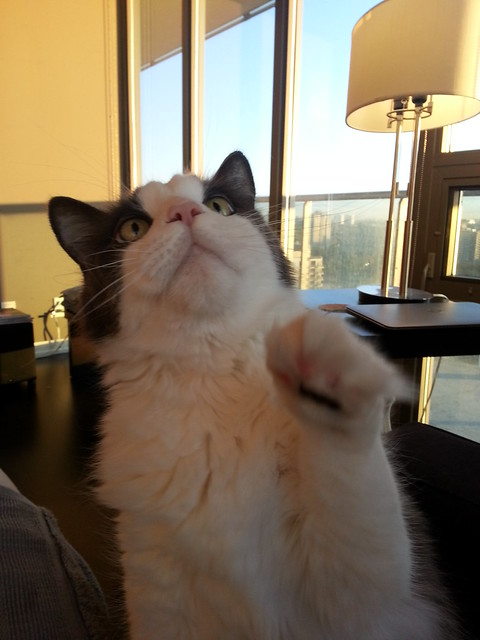 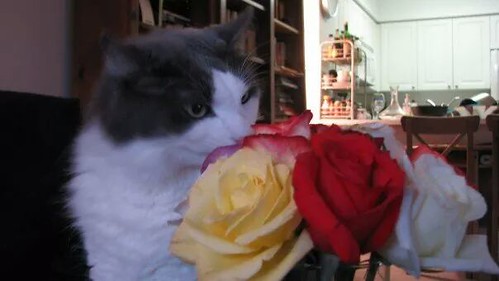 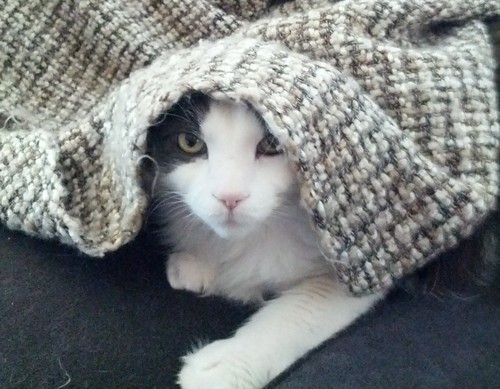 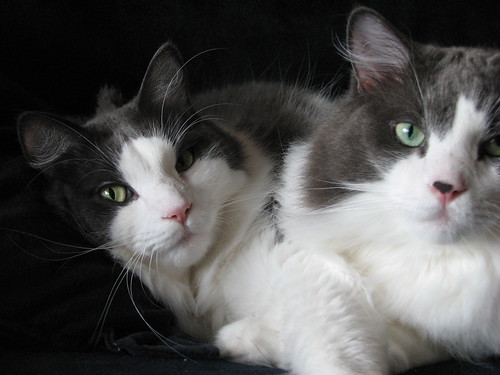 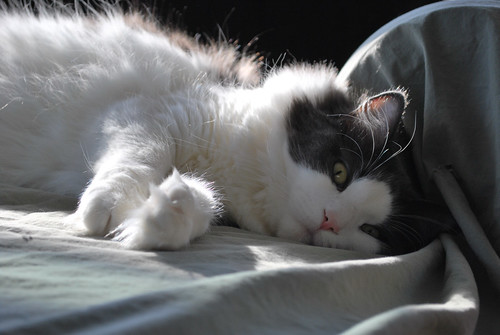