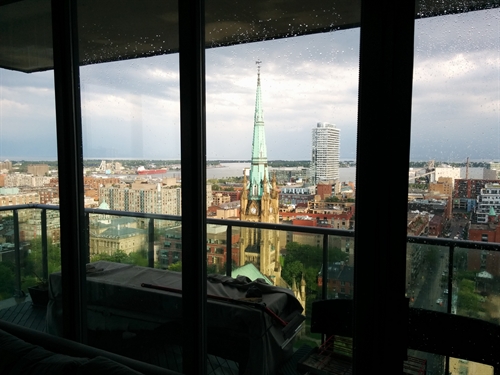 I can’t remember the precise date when I moved to Toronto. I know it was May of 1997 but the exact day escapes me. I’m pretty sure it was early in the month; I’d finished university in April and I seem to remember having a week or so to get settled before starting at my new job. Moving here was my first real adventure.

I also can’t remember the exact date I left home for university, but I’m pretty sure it was Labour Day of 1993.

So maybe I’m off by a few days here or there, but what I realized recently is this: I’ve now lived in Toronto longer than I lived on my parents’ farm growing up, thus making it the longest I’ve lived anywhere. I spent my first 6600 days there in Nova Scotia, give or take, and now I’ve spent the same here in Ontario. So Toronto is now, without any mathematical qualification, home.

I didn’t expect to live here for that long. I didn’t expect to live any one place for that long. I really thought I’d end up moving cities a lot, especially at first, and I almost did move to Vancouver at one point. But work kept me here, and then kept me here longer, and now I’m at the point where I’m not sure where else I could move (in Canada, anyway) if I wanted to advance my career.

I had friends from the east coast who moved here with a loose plan to move back east pretty much as soon as possible. Most did, and have done very well for themselves. I entertained the idea for a while, but like I said…we’d have to do it for a reason other than work, and right now we have no such reason. I envy those friends sometimes though, being back in smaller, friendlier, happier cities. Like Halifax. I miss Halifax. But I’m not sure I could live there again.

I can honestly say that I don’t love living in Toronto. I love a lot of things about the city, but it still doesn’t feel comfortable the way Halifax does. It doesn’t make me swoon the way Vancouver does. It doesn’t thrill me the way New York or Paris do. But those are cities I visit, not live in, and the living there is what exposes the pains and the gaps.

Besides, if Toronto is starting to feel boring, that’s not Toronto’s fault — it’s mine. When I look at how little of the city we frequent, at how few of the things in it we do, I realize it’s not about the city you’re in. It’s how you use your time in it.

When I finally escape my office, maybe I should spend that time going on more adventures.