Zoinks, kids. WHAT a week in Dublin. We went because I had a work reason to be there, but — like Lisbon last year — we ended up having a whale of a time.

My bid for a business class upgrade worked perfectly, so we had a pretty posh flight to Dublin. I finished watching Darkest Hour and a few episodes of Game of Thrones and got a few hours of sleep.

We arrived in Dublin and got a cab to the Spencer Hotel, after a brief ATM hiccup. We slept a few hours, and then decided to walk around Dublin. We checked out the #1-rated beer place in Dublin — Brew Dock — for some lunch and very tasty brews.

We enjoyed the shockingly warm weather and walked back through the CHQ (Customs House Quay) building before crossing the Liffey and strolled along that side. So many big corporations, startups, and cafes have moved into old dock buildings. I loved it. We got back to the hotel before a visit to Bear Market coffee and then Lindsay and I met a few colleagues for drinks at Ely wine bar.

I had a bit of work stuff to deal with, including a trip to the Guinness Storehouse and the Gravity Bar, which was at least a little bit cool.

After that took a cab back across the Liffey where Lindsay had walked to meet me, and we had dinner at Bar Italia. It was in kind of a touristy part of town (Temple Bar, with which we’d become very familiar) but it felt pretty legit. We shared Burren cold-smoked organic Irish salmon marinated with orange and pink peppercorn, and a killer burrata. For mains I had chargrilled lamb rack in a crust of pistachio-nut on a bed of roasted rosemary potatoes; Lindsay had fresh Gran tortellini filled with wild mushrooms in a porcini and parmigiano DOP fonduta cream, finished with white truffle oil. We walked home, overly full and pretty sleepy, but enjoying the lovely views. So we had the traditional Dublin Italian meal under our belts, I guess? 😐 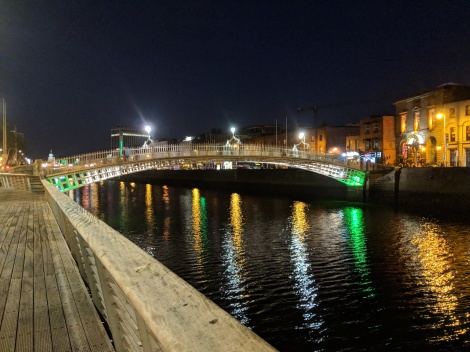 I spent the day at a work thing; Lindsay made her way around the city finding writing venues. That evening we took our first true foray into the Temple Bar neighbourhood for a drink at Fallon & Byrne, which is this really cool grocer with a cozy wine bar in the basement. We didn’t stay long — we had reservations elsewhere — but we loved our quick visit. We decided we’d come back.

We walked down the street a few metres for our reservation at Taste At Rustic. I don’t quite know how it ended up on my map — a Japanese fusion place wouldn’t normally be at the top of my list — but I’m glad it did. We had a SERIOUS meal:

Day two of the conference had me running around and introvert-exhausted, so I took off immediately after. We had plans that night and wanted to get a bite beforehand, but Dublin rush hour traffic worked against us — what should have taken 15 minutes took closer to 45, and we had to eat in a rush. We tucked in at Piglet wine bar, and they turned us around faaaast. We ate jumbo prawns and beef tartare and orecchiette w/ pork ragú, smoked paprika and parmesan, and took off for our play.

The play, at the Project Arts Centre, was called My Son My Son. I won’t try to write a proper summary, but seeing a play written by a woman featuring an all-female cast and dealing with so many feminist issues, on the eve of the Irish referendum to decide whether to repeal the ban on abortion, was pretty powerful. The result is now known, but the night before we saw many ‘YES’ or ‘REPEAL’ shirts in the audience, just as we’d seen around the city all week, and as of that night the outcome was far from certain.

After dinner we made our way back to Fallon & Byrne for a bit more wine, and some charcuterie, including some cheese called Durrus (made near Cork) which Lindsay declared to be her all-time favourite. We ended with a few glasses off the Coravin list, which had a little more cork in it than we would have liked. Afterward we had a final nip in the hotel bar. I chose a lovely 21 year old Redbreast Irish whiskey.

With the conference now done, we had the days to ourselves. We used the day to do what we do best: eat, and visit museums.

First up was the EPIC, the Irish Emigration Museum, just down the street from us in the CHQ building. Pretty new, it seems, and with a great use of technology (HD projectors, motion/gesture detection, etc.), sound, sculpture, and other visuals, it helped weave a compelling story of Ireland as told by the people who’ve left it.

After that we hopped in a cab and traveled north to see the Dublin City Gallery / Hugh Lane. But first: lunch at Chapter One. It’s a Michelin-starred restaurant in the basement of a writer’s museum. We took a chance that they’d have a table for lunch Friday, and we lucked out. We took our seats and proceeded to have one of the best meals of our lives. I’ll describe the food below, but the service was just…impeccable. Perfectly attentive, utterly charming, and at times hilarious. In the throes of feeling oh-so-decadent, like “who are we kidding, eating like this?!” about this meal, one of the staff joked along with us, saying “It’s almost reckless, really!” and it was perfect. Maybe you had to be there? Anyway, the food:

After that we stumbled outside and enjoyed the sunshine — did I mention it was brilliantly warm & sunny our whole week in Dublin, and didn’t really rain until the moment we left? — for a few minutes before heading into The Hugh Lane. We saw the main collection and the Amanda Dunsmore exhibition “Keeper” and the recreated Francis Bacon studio. After that we took a quick stroll the Garden of Remembrance, then cabbed back to our hotel. We grabbed our bags and switched to our home for the back third of our trip: Stauntons On The Green. Our room was a little disappointing — cute and all, but being on the ground floor the view was entirely blocked by the hoarding outside the hotel, so we couldn’t see St. Stephen’s Green at all. They promised to move us to another room the next night, and we passed out on our temporary bed.

Somehow, that night, we had another grand meal planned. Dax was billed as maybe the best non-Michelin-starred restaurant in Dublin. We were worried the near-miraculous lunch we’d been fed would ruin all meals to come, and certainly all to come THAT DAY, but Dax held up just fine, thank you very much. To wit, the tasting menu (as best I can remember it):

Luckily our walk home was a short one, because we could barely move. We got back to the hotel, saw the news that exit polls were predicting a landslide for the ‘Yes’ vote, and passed out.

We decided to have breakfast at the hotel, both of us opting for the smoked salmon and scrambled eggs. That was the fuel for our walk around the Irish Museum of Modern Art, or IMMA. It was an outstanding visit in an old military hospital, introducing me to Brian O’Doherty, feeding Lindsay new relevant-to-school material, and treating us to a wonderful Lucian Freud exhibit. There was a gorgeous garden and, somewhat randomly, an informal singing to sick children. It was all a bit much, really. 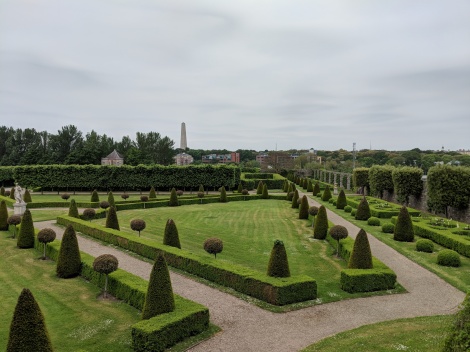 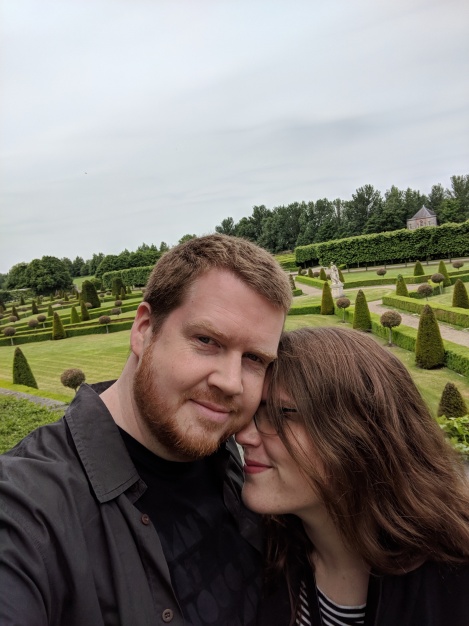 We had an absolutely smashing Uber driver from the IMMA to our lunch spot. He pulled up to the curb and yelled “Dan, how the hell are ya?” as we got in. Brilliant. We talked beer, tourist sites, Dublin and Irish history, viking timelines, and a host of other topics in our short time together, but he made us want to revisit Dublin. Like, RIGHT NOW. I would’ve gladly spent more time with him, but he dropped us at Against The Grain and we were thirsty.

Owned by the same people as Brew Dock, Against The Grain enticed us right away. Chill vibe, top beer, good food. I had a Wild Beer Trepache sour, a Boyne raspberry sour, a Thornbridge Cocoa Wonderland chocolate coffee porter, and a tshirt. All supoib.

After lunch we slid over to the afore-mentioned St. Stephen’s Green, and strolled through a bit of bucolic loveliness in the middle of Dublin. We lay in the grass and kissed and laughed at kids and dogs and it was pretty alright. After a spell we walked out of the park to our hotel, where we found our lovely new room with a view of the very park we’d just enjoyed.

We napped an showered and changed and set out for Temple Bar. Mind you, this was our first foray into Temple Bar on a weekend, and…oof. What a busy mess. We had to dodge through there to visit Jam Art Factory, where we bought some prints, and to have a glass of wine at La Caverna before dinner. Unfortunately they were packed, so we went around the corner to Port House instead. We got a glass of wine and an espresso in us before an unbearable crowd formed and we beat a hasty retreat across the Liffey.

Our final dinner in Dublin was at a classic: The Winding Stair. It’s a cozy room atop a bookstore, with an open kitchen and a view (if you’re lucky) of the river and the Ha’penny Bridge. We ate and drank very well, to the point where we had to tell the server to take’er easy after our starters, lest our mains cause a wafer-thin-mint moment. We ate:

We enjoyed the whole meal with an outstanding bottle of Savigny-lès-Beaune 1er ‘Aux Vergelesses’ Simon Bize 2011 Chardonnay. Later I realized that I recognized the name — we had a bottle of their Pinot last fall in Paris, at Fish La Boissonerie. For dessert we just ordered glasses of Sauternes, but our server (pressed into bartending duty at the end of the night) didn’t understand a typcial Sauternes pour and ended up pouring us a normal 5oz glass. So we got right lit up, we did.

Not much left to do on our final morning but eat some breakfast, so we made it a good one, walking a few minutes to Meet Me In The Morning. We weren’t sure what to expect, but it turned out to be one of the most delicious breakfasts EVER.

I had the hash (McNally potato and beet, a poached egg, beet sour cream, greens and Toonsbridge halloumi with Gubbeen chorizo) while Lindsay had the eggs & greens (McNally kales, garlic yoghurt, paprika oil, curly parsley, two poached eggs, rustic loaf, and halloumi). After finishing we were patient (not really) and waited for the homemade doughnuts to come out, one rhubarb cheesecake and the other vanilla creme. Oh, and some dude came in carrying the cutest puppy either of us had ever seen and we all (us, the server, the other patrons) melted. Puppies and doughnuts. Jaysus. What a send off, Dublin.

After a hasty re-pack back in the room we checked out. The rain started just as we left, which left me convinced that the Irish don’t really have bad weather, they just tell us they do to keep us away. Our Uber driver, Sean, was an utter treat. He dropped us at DUB, we checked in, we hung out in the lounge, we debated buying the last piece of Durrus cheese in the Dublin airport, and we boarded to come home. The flight was easy-peasy; arriving at Terminal 3 was a goddamn gong-show. But we made it.

We need to go back to Dublin, and to see the rest of Ireland. That is all.