Last week I was back in San Francisco for the first time in about five years, this time for a conference which would take up the better part of a work week.

My flight was around noon, so I worked from home and then had a nice easy commute to the airport. Almost too easy, really — my Uber driver and I were both freaked out by how smooth a trip it was.

My flight was similarly simple, and with a little extra leg room in the exit row. I watched The Post and Red Sparrow and landed at SFO in no time. The night before the conference began I spent a night at the Inn at Union Square, which was fine, if a little noisy. It was well-placed, though, to try a good place for lunch: Hogwash, where I had a dirty sausage sandwich and a Little Creatures Juicy Pale Ale.

It was also convenient for that night’s dinner with other conference attendees, at Scala’s Bistro, just a few seconds around the corner. Dinner was fine. Too loud. Too cramped. But gift horses and all that. Afterward I walked up the hill to check out another beer joint, Hopwater Distribution. I unwound from the forced interaction and closed the place down.

The next day I switched to my home base for the remainder of the conference, and spent the day attending session. That night some of us got to attend an event at the SFMOMA, which was showing an interesting Magritte exhibit (and has lots of Cy Twomly pieces that I really liked). There were rare whisky tasting and dessert art stations set up outside, so I…had a good time.

On Wednesday, after the conference day ended, I skipped the planned social event for the 20,000+ (!) attendees and had dinner in the hotel restaurant, Luce. My meal was outstanding, and I got to try Keenan Cab Sauv for my first time since visiting the winery eight years ago.

Before the conference started I made my way to the nearest Blue Bottle Coffee for a cappuccino. It was a long wait. It was not worth it.

After the conference ended Thursday I made my way to the Mikkeller Bar SF to have some lunch and do some work. I’d heard good things. I’d read better things. I was immediately overwhelmed. There were at least a dozen beers I wanted to try, most of them stupidly strong.

In the end, in addition to another tasty sausage, I had:

I walked (slowly, carefully; those last few beers were 10% and 14% ABV respectively) back to my hotel and chilled for a bit. I was in the mood for more steak, and made dinner reservations (solo) for Alexander’s. It was a killer meal, and one of the best steaks I’ve ever eaten. And because I was sitting at the chef’s bar they kept sending over little tastes and treats , and the Sommelier led me down a very lovely path indeed.

Nothing to do Friday but more work in the morning, and then fly back to Toronto. In the crap bar at the airport I happened upon one last killer beer: the Ballast Point grapefruit “Sculpin” IPA.

The flight home went super-quickly: I was somehow upgraded to premium economy, and watched two movies (Avengers: Infinity War and Detroit) and suddenly I was back in Toronto. Body tired, brain full.

Our calm new GoodFood routine got thrown off a little last week with some visitors and outings. I/we needed them though.

First was a visit from one of Lindsay’s friends, in from out of town. They came back to our place for a drink after going out for dinner, and we popped a bottle of red.

The next night I had a drink with Matt at Beerbistro, which I haven’t been to in a long time, and we had a great catch-up on work and life and food, and I gave him a recommendation for Lake Inez that he jumped on later in the week. After that I met up with the two of them and had a few glasses of Le Vieux Pin Equinoxe Chardonnay before we all piled into an uber.

Dinner was at Gare de L’est, and it was fantastic as usual. Coq au vin, duck confit, charcuterie, Bordeaux…so, so good. Service was a little…odd? Not our server, but another guy who circled around and just seemed to be trying too hard. We finished our meals and escaped him, stopping at Chez Nous on the way home for one last glass of wine.

We spent a few quiet nights at home, and then Friday slid out of work to meet Mike + Heather at The Wren. There were SO many good beers, and by the time we got there we were into the bottle list. Luckily they’re game to try a lot of the same stuff, and the staff there seems to like it when you try the fun bottles. They stopped back at ours after to see the new kitchen (I used their contractor) and collect their maple syrup for the year. It was good to see them. It’s always good to see them.

Saturday morning we slept the hell in before finally dragging ourselves to Frankie’s Italian, the new incarnation of Lil’ Baci. I pretended nothing had changed and ordered the spicy pork meatballs and eggs.

Though it’s been an institution in Toronto’s French dining scene for years, I’d never managed to get to Le Select. Until last week.

I had the beet + goat cheese salad with chestnuts, and the smoked duck breast special with celeriac purée. I had a really excellent bottle of 2010 Château St-Georges from St-Émilion, and a glass of 2010 Château Suduirault 1er Grand Cru Classé Sauternes.

I’ll be honest: it made me miss France.

A couple months ago I posted pictures of our old busted kitchen, and the interim state in which it existed for a while during renovations: 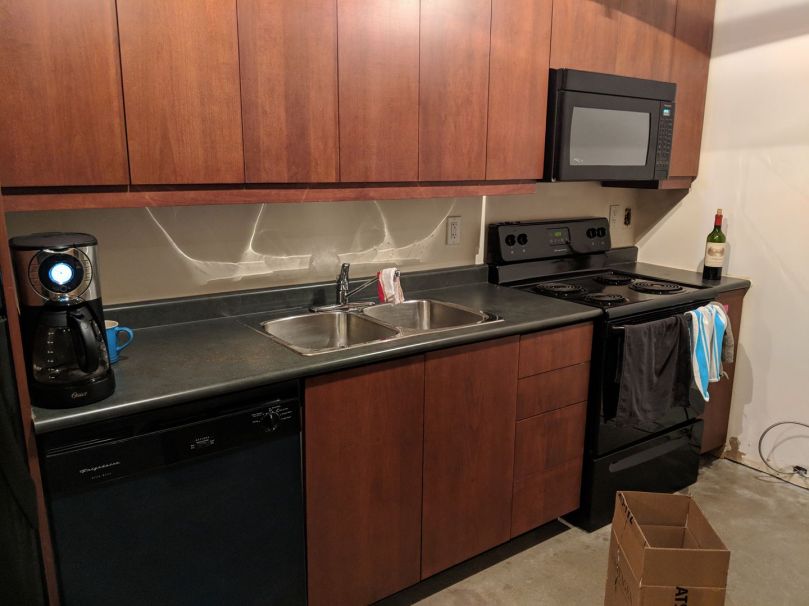 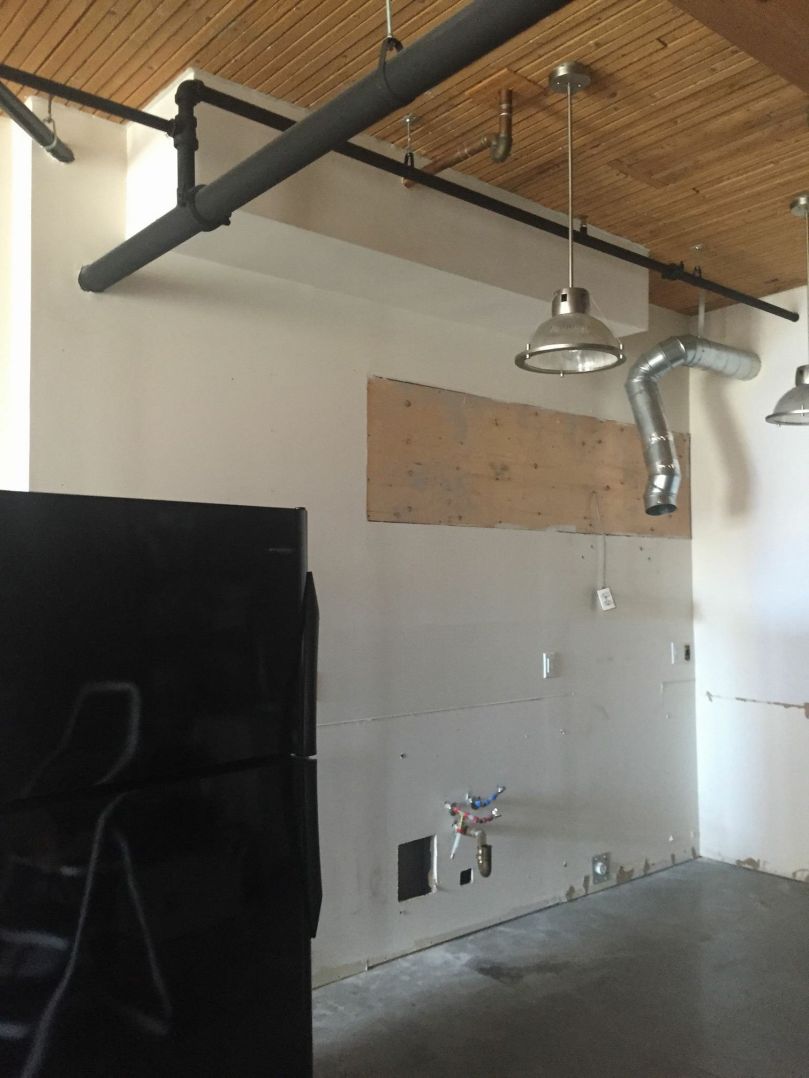 Finally, a few weeks ago, it was done. Well, more or less. We’re still waiting for the backsplash, but we finally have a functional (and beautiful) kitchen! 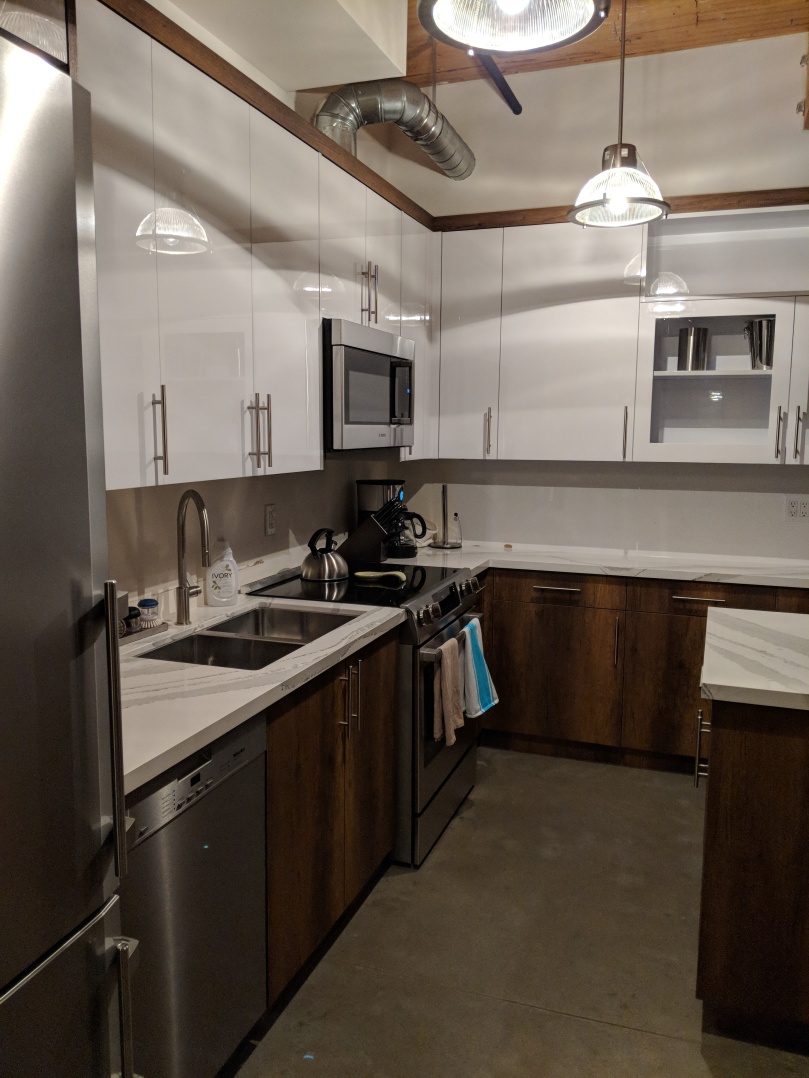 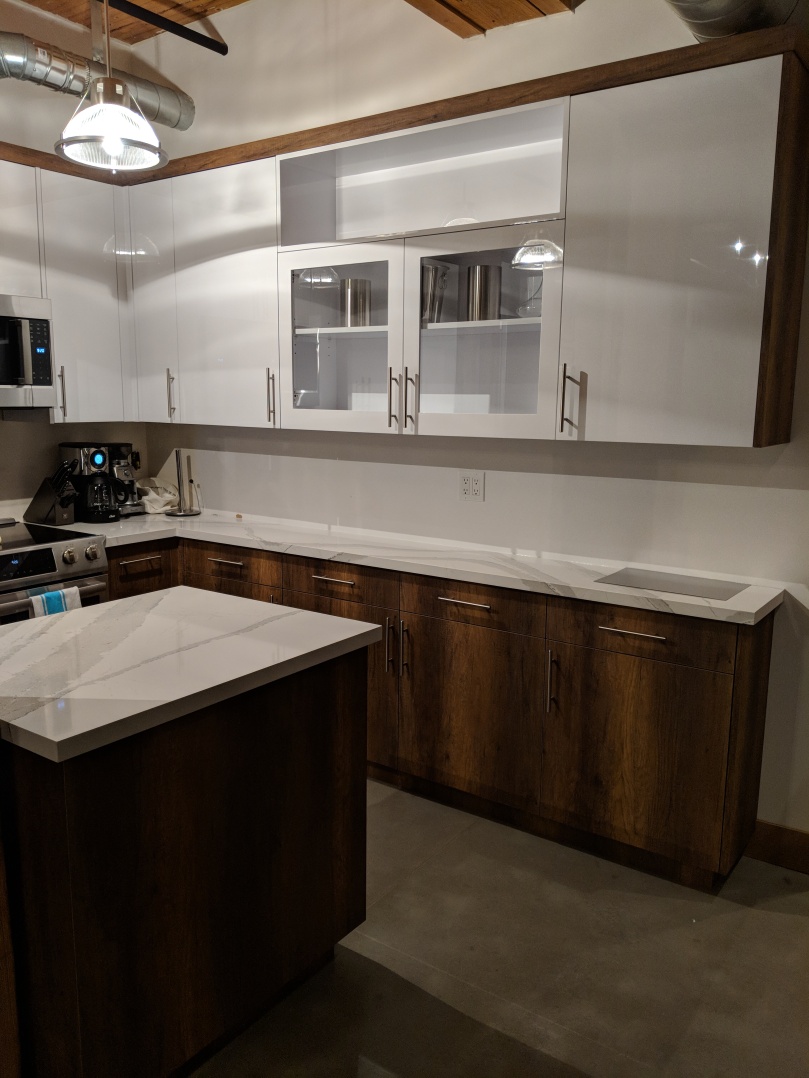 To celebrate having a new kitchen we decided to actually put it to use, and signed up for GoodFood. We’ve long contemplated a service like this (where they drop off pre-measured, pre-prepped ingredients and simple instructions) since we have neither the time nor the energy to come up with ideas and recipes. Even shopping for groceries is a stretch, so we end up eating out constantly. From both a health and financial standpoint, this made a ton of sense. I admit to being nervous about the quality of the food though.

However, we prepped our first meals this past week, and I have to say: they were amazing. Like, all three were delicious, and they took 20-25 minutes to prep. So far, a week in, this seems like one of our best ideas ever. Bonus: each meal gave me an excuse to open good bottles of wine from the collection, so:

[Missing: the lovely Domaine Louis Moreau 2016 Chablis we had with our fish.]

We arrived back in Toronto last night, ending an awfully busy 5-6 weeks of travel. The last ten days have been pretty intense family time, spread across a few locales.

Last weekend my mom was in town, in the middle of a trip to visit her sister in Guelph, so a bunch of family and a few friends drove into town for dinner before they went to see Come From Away. We all met at Locale Mercatto for an early dinner and had a good old chat, not to mention some good food and nice volcanic wine. Apparently we were also meant to go to the play but we got our wires crossed; in any case I had a work issue in progress, and we had packing to do.

The next day we flew to Halifax, had a quick stop in Bedford, then drove to the Annapolis Valley and met Lindsay’s mom and brothers at the same cottage as last year — but for two nights this time. We played games outside and had a big grilled steak dinner the first night, but spent the second day huddled inside around a fire for warmth on what turned out to be a cold, rainy day. It was still completely relaxing though, and the rain broke long enough for some grilled sausages after our games were complete.

Tuesday morning was much nicer so we squeezed in a last game of washer toss before departing. We stopped at Lightfoot & Wolfville on the way back, having just missed their grand opening last year. We bought a few bottles to bring back, and ate (extremely delicious) pizza and garlic fingers outside. Then it was back to Bedford. 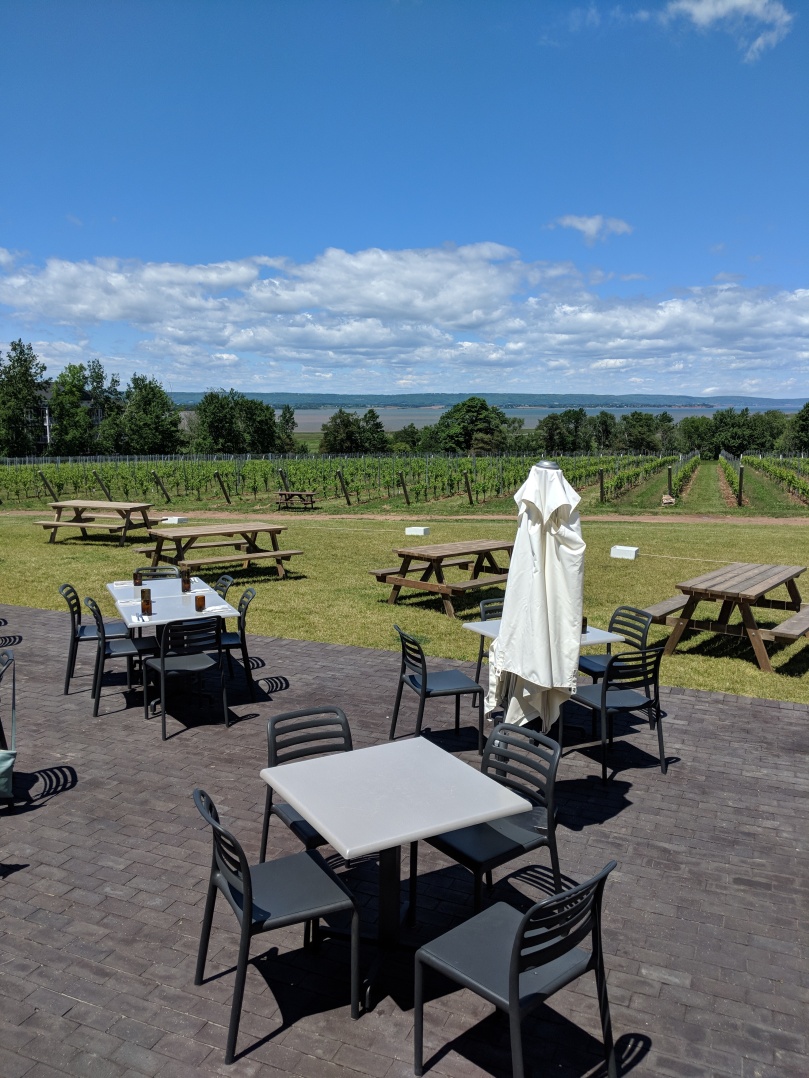 We spent the Tuesday and Wednesday nights at Lindsay’s dad’s place, zipping downtown for a quick dinner Wednesday at Your Father’s Moustache, and on Thursday attending her youngest brother’s graduation. After a big feed of Chinese takeout that night back at their mom’s, we played washer toss ’til it got dark and Yahtzee (seriously) into the wee hours and then crashed.

We took it easy Friday, eventually exiting Bedford and driving to my parents farm. We arrived late that night, just late enough to crash hard in the nice cool basement. The next day we slept in a bit before getting up and getting to work — it was the day of my parents’ 50th anniversary party, and there was an open house from 1-4. A friend of mom’s (the same one who accompanied her to the play the week before) catered, and we were all put to work slicing and setting and placing and cleaning. Nearly a hundred people wandered through the house on a stiflingly hot day, all to congratulate my parents on a pretty remarkable accomplishment. 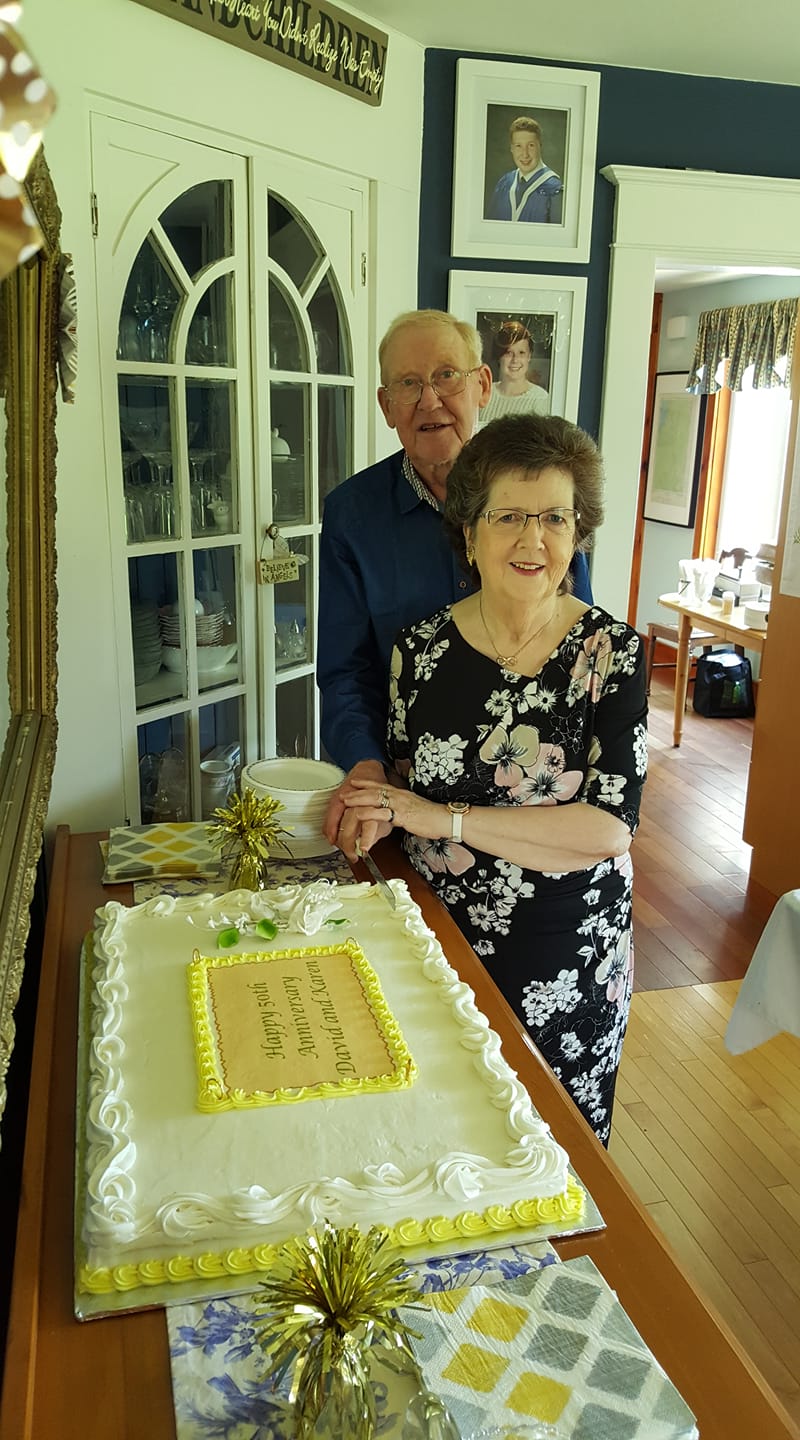 We did manage to squeeze in a tiny bit of relaxation time at the farm as well, from playing many games of crib, to perpetually scratching the dogs, to lying in a hammock. 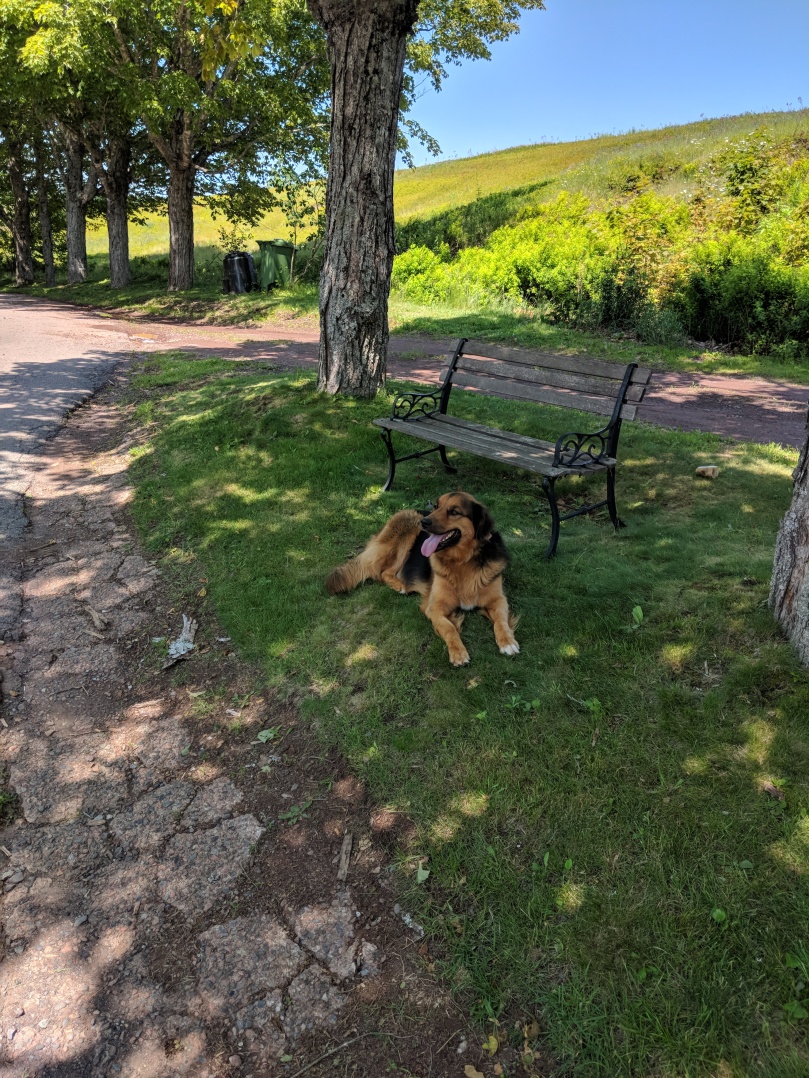 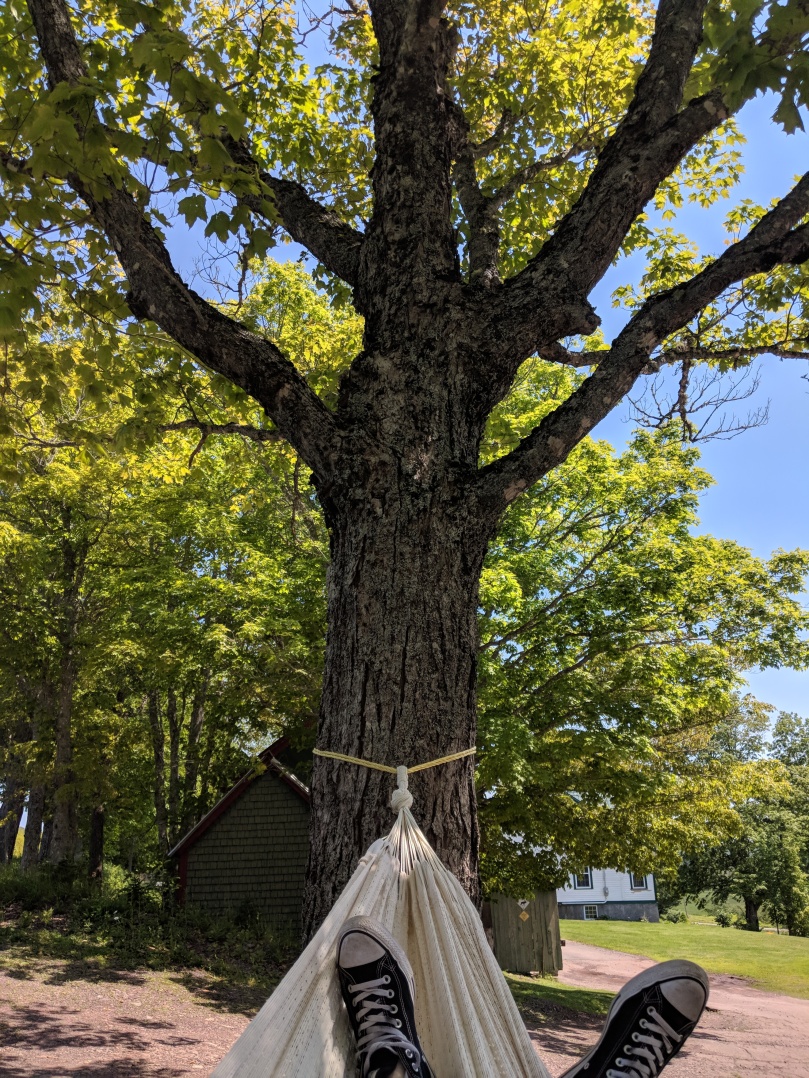 Everyone left Sunday morning after things had died down. We got to the airport and had a glass of wine at Vino Volo, which might have been ill-advised since Porter boarded their flight almost instantly, resulting in us actually getting paged as we walked down the terminal. We worked on the flight back, arriving to a moist blanket of heat draped over Toronto, and have scarcely left the loft since.

It was a fun trip, if not terribly relaxing. Frankly, we’re pretty excited to not have plans to fly or drive anywhere the next few weekends.